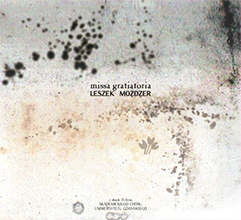 „Leszek Możdżer reaching out to one of the oldest forms;mass, has demonstrated once more his extraordinary intuition. He didn’t leave a shadow of a doubt that music is in the first instance a matter of spirit and he showed also, that technique is what counts in art. Leszek Możdżer composed his Mass especially for Gdańsk University Choir, knowing very well their capabilities. (…)Great applause for thechoir singers, the conductor – also for the vocal part, and outstanding jazz musicians.”