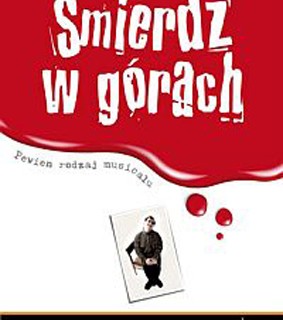 written and directed by

The Movie about the Hippie Trade

written and directed by

Mrs in the Shop – Janina Garbińska-Budzińska

The Leader Himself – Wojciech Kupczyński

Light and Love for One Another (Hippie Leader) – Michał Juzoń

The spectacle received Fajerwerk 2006 by the Łossskot TV magazine, premiere in the Capitol – Musical Theatre in Wrocław, October 26th 2006.

A brilliant original screenplay in Monty Python style with rock, hip-hop, disco, gypsy songs and jazz performed by surreal hippies and scouts, accompanied by a band dressed like sheep.

“Śmierdź w górach’s” main character, Waldemar Jasiński, is a really anti-musical persona – an outsider living in Bieszczady, taken straight from the 70’s, making a living from writing jokes. Jasiński sells his jokes to Warsaw, but one day it turns out that the capitol doesn’t find them funny anymore…In the meantime the locals and scouts find a booklet with the jokes in them and they laugh hysterically, not able to finish any of the jokes.

Gazeta Wyborcza wrote: “The plot connects the etudes and each one of them is like a Monty Python sketch – a scout team led by a despotic patrol leader (phenomenal Jacek Gebura), the team leader (Justyna Szafran) climaxing whenever she hears Jasiński’s jokes, mushroom-stoned barmaid Jola (played amazingly by Bogna Woźniak),a duo of Agnieszka Bogdanand Konrad Imiela or Jasiński’s daughter and a Japaneese mixed with Piotr Rubik, who make duo parodies of classical musicals and sing “Skamerujmnie” (“Camera me”).

To make art or to sell?

This problem has been bothering artists for ages. This time the question becomes the centre point of the musical. The play takes place in the futuristic Bieszczady mountains, inhabited by colourful individuals: degenerated hippies, bizarre pub-goers, frustrated scouts. Absurd dialogues with catchy musical songs and original choreography – this is what the audience can expect.

The creators dared to make a modern theatre genre combining musical lightness with excellent acting and a pioneering sort of scenography. All the set backgrounds are a construction made of balloon-like material. Konrad Imiela and Cezary Studniak – the writers and directors of the show, are members of Formacja Chłopięca Legitymacje, which gave many great concerts and shows and created a modern Actor’s Song Festival Gala, called “Brain Wind”.

All their achievements meet with a euphoric reception from the critics and the audience. The shows composers are unique individuals like Leszek Możdżer – the show’s musical director. We will see the stars of Musical Theatre Capitol on stage: Bogna Woźniak, Bartek Porczyk, Kamiński Brothers, Konrad Imiela, Cezary Studniak, Justyna Szafran, and guest starring as Waldemar Jasiński: Henryk Niebudek and Bogdan Grzeszczak.

Waldemar Jasiński – a person we don’t know much about. All information comes from oral tradition, some evidence of his existence can be found in literature, for example in Edward Stachura’s works. He lived in the second half of the XX century, the last facts come from the 70’s. One thing is for sure – he was an artist outsider, he resided in Bieszczady, most probably in Ustrzyki Górne, and he lived from creating jokes.

Nobody knows where to look for his grave, which is a typical thing for many legendary Bieszczady freaks from the communist times. It is highly probable that he, like the Tibetan lamas, is reborn in future incarnations. The thing that distinguishes him from the Eastern spiritual leaders is the fact that he comes back with the same name. One of his incarnations is the owner of an agro-touristic farm in Srebrna Góra- Waldemar Jasiński, of course.

Śmierdźpolski (lat. canisbubae) – a new species created especially for the order from the Musical Theatre Capitol on the premiere of Śmierdź w górach”. The race came into existence thanks to many months of hard work by a scientific team directed by Dr Robert Kaczmarczyk, working in the Cathedral of Episootology and veterinary Administration in the Clinic of the Institute of Veterinary Medicine on Agriculture Academy in Wrocław.