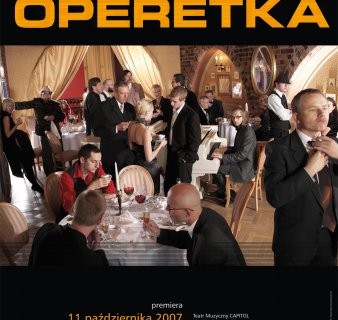 Witold Gombrowicz’s “The Operette” is one of the most important theatrical pieces of the twentieth century. Written in 1958, first published in Polish in 1966 by the Literature Institute in Paris (in the same volume as “Diary 1961-1966”), it was soon translated to French, Italian and many more languages. Its French premiere took place soon after Gombrowicz’s death, in the Théâtre National Populaire in Paris, the Italian one in Teatro Stabile in Aquila, the same year. The first Polish production of “The Operette” was the legendary one, directed by Kazimierz Dejmek in the Nowy Theatre in Lodz (1975). Since then, Gombrowicz’s play has been regularly displayed all around Poland. The showin Wrocław’s Capitol is the first production of “The Operette” in a musicalformat, not as a drama, like it used to be performed until now.

An operette, which was already an anachronistic theatre genre in Gombrowicz’s time, today sounds as ancient and forgotten as “metteur en pages”, “themophore” or “hair roller”, especially among the younger generation. Then how to show today “the divine idiotism of the operette”, the form chosen deliberately by Gombrowicz to poignantly show stiff, empty gestures and customs? “Then it should keep on being strictly an operette, from the beginning to the end, untouchable and independent; on the other hand it should be a profound humane drama. Nobody would believe how much workthis foolishness needs to be dramatically organised” – writes the author in the preface.

The fashion craze, serving in art as a metaphor of twentieth century’s history and ideology, today gets new purposes and meaning while taking over the world like a wild pagan cult. So what is “The Operette” actually about in 2007? Is it about how the customs and conventions, which we got used to like to old, comfortable shoes, are turning into dust? Or maybe about nudity understood as being ready to put on a new costume? What would this costume be? Why dodirectors all over the world keep on reaching for this text? One can of course look for clues and suggestions in the essays of notable theatrologists or brilliant critical works. However, theatre exists not to provide a ready answer for everything.

As far as I can remember, I always dreamed of writing a score to Gombrowicz’s “The Operette”. However, when I finally got the offer, I couldn’t make up my mind for a long time. I hadn’t got a clue how the music should sound while I was reading the dialogues – abstract in their stupidity and emptiness, not giving hints to the form which the music should take. In the preface Gombrowicz suggests that the composer should use “simple and old melodies”. We are in the 21st century, what does it mean now: to use simple old melodies? How simple should they be, how old?

I had a sudden epiphany. While sitting behind the steering wheel, I was changing radio channels as usual, trying to avoid the sticky pulp of pop tunes, americanised, Polo-English hits, in which the Polish singers don’t care anymore about the subtle differences between sz”, „ż”, „ś”, „dź” or „ć”, but, ecstatically aroused, they serve us their blues “yeah, yeah” or their delight at American “mmmm…”, based on omnipresent pentatonic scale – and then I got it. That was it. That was the music from Gombrowicz’s “The Operette”. The music based on American concept, biased pop kitsch, soaked almost annoyingly with blues melisma, full of tasteless, irritating American diminutives, not caring about the message in the lyrics because ofstupidity and self-satisfaction. “Władysław, take care of my left trouser leg” – this is how Gombrowicz starts his opus. Isn’t it a perfect phrase for a hit?

I got to work with joy, messing with American harmonies, glissandi, intros and disgusting ornaments, which make contemporary pop so annoying. I couldn’t help myself but write a couple of typical festival songs and I stuffed it with pentatonics, blues scale and suspended accords, without which none of the American hits would get on air. Several times I couldn’t keep the routine I had chosen, my ego demanded running away into other harmonious melody areas, however, the general concept had been conscientiously realized.

I hope the joy of creating it willbe obvious to you.